95. The Path of Eight Hundred Kilometers

Chuzaburo Koda of Kawahigashi Village in Yamato Province was employed at the Agricultural Experiment Station in Niigata Prefecture. When he went home on vacation late in 1881, he found that the condition of his second daughter, Riki, who had been suffering from an eye disease for two or three years, had become worse. Although medical attention was given, it was said that it was only a matter of time before she would lose her sight.

The new year, 1882, arrived with the whole family being deeply concerned. Early in the year, they were about to decide that they should offer prayers at one of the most famous temples of the country, the Kanzeon at Mount Otowa in Yamato Province. Yosaburo Miyamori of the same village heard of their plan and visited the Koda family. Miyamori had already been a follower in the faith for several years. The family had him offer prayers for Riki at once. The next morning she was able dimly to see her fingers and cookies as well.

As a result, they gave up the idea of going to Mount Otowa, and instead, the parents and Riki returned to the Residence on March 5th. They stayed there for seven days. On the third day, Chuzaburo’s wife, Saki, offered this prayer: “I will offer one of my eyes as a sacrifice, so please save at least one of the eyes of my daughter.” From that night on, Saki gradually lost the sight of one eye. In exchange, Riki gradually regained the sight in one of her own eyes, until it was fully recovered. Chuzaburo was so moved by this wondrous blessing that for the first time he made a firm resolution to have faith in God.

“There is a bridge of the path which is eight hundred kilometers long, and there is no one but you to cross that bridge.”

Koda was filled with emotion by these words. He made a firm resolution from the depths of his heart to spread the fragrance of the teachings and to save others. He departed on March 17th. Thus, he took the first step of mission work in Niigata Prefecture.

“Roughly in the area west of JR Yanagimoto Station in Higaki-cho, Tenri.”

In a pithy article of just six and a half pages, Yomei Mori sensei from the Oyasato Institute for the Study of Religion offers much insight regarding this particular selection from Anecdotes, which I will try my best to paraphrase at length here. The main focus is on three key expressions:

In discussing the expression 200 ri, while the wondrous blessings his daughter received for her eye condition motivated Chuzaburo Koda to make a “firm resolution to have faith.” The government must have placed great trust in Chuzaburo and his technical expertise to have refused his resignation and demanded for his return.

Chuzaburo, who wished to devote himself exclusively for the path, was caught between carrying out this wish and meeting his worldly responsibilities. Torn, he approached Oyasama for advice and she told him, “There is a bridge of the path which is 200 ri long, and there is no one but you to cross that bridge.”

Mori sensei then speculates that Oyasama’s words here are suggesting that exclusive devotion to the path is not at all incompatible with working in society if one’s heart is in the right place. He then goes on to explain that such a sentiment is embodied in the expression “sato no sennin” or “hermit/sage of the village.” Although hermit/sage is usually associated with a person who secludes oneself from society to free oneself from distractions and practice physical austerities, the phrase “sato no sennin” embodies the ideal in Tenrikyo for adherents to remain in a community and do their best not to be swept away by prevailing social currents.

Mori sensei also suggests that the expression 200 ri symbolically refers to Tenrikyo’s overseas mission of today. There are a variety of ways in which adherents are building bridges in overseas communities, beginning with cultural activities such as judo and instruction of Japanese language to providing medical or financial assistance.

On to the theme of “bridge.” In Niigata Daikyokai monogatari, Oyasama is quoted as saying to Chuzaburo Koda: “I have put in front of you a bridge spanning 200 ri. I put it there with the hope that you would cross it. If you do not cross it, it would mean I placed the bridge for nothing.”

Mori sensei goes on to write that the bridge Oyasama is referring to is obviously not a real bridge but a metaphor for the connection between Jiba and another place (Niigata in Chuzaburo’s specific case). To be connected with Jiba means to be constantly mindful of the original intention that led God to create human beings and the creation process itself. An adherent can outwardly express this connection to Jiba and show one’s appreciation for God’s daily blessings with a “return” or pilgrimage to Jiba.

He then goes on to note:

Even today, when many people return from all over the globe to make a pilgrimage to Jiba, it is a fact that some cannot return even they wish to. There are differing reasons for this. One must enter Japan, one of the world’s biggest economic powerhouses in order to return to Jiba. Financial factors especially loom large for followers from developing countries. It is downright ironic that the homeland of humanity is located in a country with one of the highest standards of living in the world.1

The notion that a person cannot return to Jiba without God’s blessing has been expressed in Scripture.2

Further, there are Timely Talks that warn adherents of the rotting of the spirit, becoming swept away by social currents, and losing sight of the original Parent, which will cause one’s bridge to rot or be swept away.3

Mori sensei then mentions that although Chuzaburo never steps foot in Niigata again after he returned to Jiba to serve at the Residence4, the people who he led to have faith in the path continued to support the “bridge” that had been put into place and made efforts to establish Niigata Daikyokai.

The word “shinjin” (faith) makes several other appearances in instructions attributed to Oyasama in Anecdotes. Some representative selections in addition to selection 95 include:

Mori sensei writes that these instructions describe a faith that anyone can practice at anytime on a daily basis in any day and age. Such a faith has much in common with the notion of the “hermit/sage in the village” alluded above.

Finally, Mori sensei offers his commentary on a number of verses from The Songs for the Service that include the word “shinjin” (rendered in the official translation as “believe(d)”). He suggests the sequence of its appearances represent different stages of how faith should develop.

My intuition leads to me to assume that “Kanzeon at Mount Otowa” refers to Kannon-ji, but I can’t be completely sure.

Oyasama is also described using the metaphor of a bridge in Anecdotes 33, saying to Risaburo Yamamoto as follows: “You shall be saved for sure if you decide to dedicate your whole life to serve this Residence. The bridge between countries; a rough log bridge. Without a bridge, a river cannot be crossed. Will you dedicate your life or not? Arakitoryo, arakitoryo!”

The word “arakitoryo” or “(rough) wood master” implies that Risaburo was asked to become the master to find and hone the rough pieces of timber (i.e., missionaries) that can be fashioned into bridges. While Risaburo made some missionary efforts himself (as described in this story), it appears that he devoted most of his time at the Residence as an “intermediary,” and instructed Oyasama’s teachings to returning followers. In this sense, his role was not different from that of Chuzaburo Koda’s.

If I were to compare my own faith with that of a bridge, it would admittedly be short and rotten, not unlike the one in the picture below: 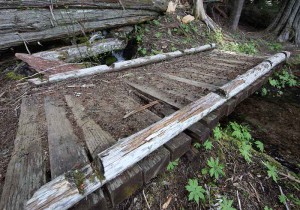