Oyasama told Shirobei Umetani soon after he became a believer in the faith:

“Become a person with a gentle heart. Save other people. Change your habits and temperament.”

He was hot-tempered by nature.

Shirobei was working at the Residence, plastering the wall of Oyasama’s Resting House which was under construction in 1883. When he heard people maliciously gossiping that “the mason from Osaka, who cannot get work there, has had to come as far as Yamato for work,” he became very indignant. In the middle of the night, he quietly gathered his belongings and started to return to Osaka.

Walking on tiptoes, he was about to leave through the main gate when he heard Oyasama cough from her room in the Nakaminami-Gatehouse.

“Ah! Oyasama!” he thought; his feet stopped and his anger disappeared.

Next morning, while he was having breakfast with the rest of the people at the Residence, Oyasama appeared and said: 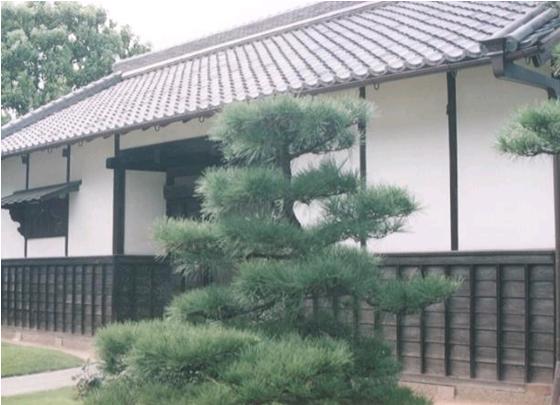 Translation of “Sawa‘s note”
“The ‘sangai‘ of ‘Yamato sangai‘ [‘as far as Yamato’] is allegedly a Buddhist term, but I assume it doesn’t necessarily have any particular meaning in this case. I wonder if it means something like he purposely comes from a bustling place like Osaka to remote Yamato to work. It can be imagined not everyone could easily receive instructions from Oyasama, so [Umetani Shirobei] must have been a target of jealousy from surrounding people because Oyasama had highly valued him.”

My take / research
Sawa’s note makes an acute observation that it was more than possible for Umetani Shirobei to have been a target of envy from others since he had gained the privilege to “make personal inquiries of Oyasama without an intermediary” (as mentioned in Anecdotes no. 106) less than two years since he embraced the faith. I can easily imagine people who did not have such a privilege despite being believers for far longer may have begun to harbor a grudge against Shirobei and considered him as nothing more than an upstart city-slicker.

I find it intriguing that I came across two sources discussing Anecdotes no. 123 that cite the first verse of Song Four of the Mikagura-uta. I guess this is an implication that if Shirobei had been mindful of this teaching when he overheard people slandering him behind his back, he would not have tried to sneak back home to Osaka in the dead of night.

Umetani Daiichi sensei, a fifth generation descendant of Shirobei, mentions that he is reminded of Mikagura-uta IV:1 each time he reads Anecdotes no. 123 and writes:

The moments in which we become caught up with things in our immediate sight and succumb to human thoughts are not few. Who can say how many followers have been encouraged or had a change of heart because of this verse? To those who walk on a path solely committed to saving others, nothing offers a greater sense of assurance or appreciation than the knowledge that God is watching out for us (Umetani 2008).

Even when one aspires to embark on the path of faith, slander and verbal abuse from others may cause one’s resolve to waver. Regarding this, we are taught, “Whatever others may say; God is watching, so be at ease (Mikagura-uta IV:1).” We are also taught, “No matter what people say, no matter what people may say, do not pay any attention to what people say” (Anecdotes no. 47). Faith in this path is to believe God the Parent’s teachings to be absolute and without equal. It is essential to look forward to the future with delight (p. 14).

Quieting a hot-temper
Tenrikyo theologian Ueda Yoshinaru sensei mentions he knew Umetani Shirobei and shares that he was not aware of his hot-tempered nature; he only remembers how mild-mannered he was. Yet Yoshinaru sensei acknowledges that this must have been the case since Shirobei’s descendants have described it was so. Yoshinaru sensei attributes the change to Oyasama’s instruction and nurturing (1976, p. 41).

Umetani Daiichi sensei writes that even after Shirobei became the first minister of Senba, members of his family or of his church occasionally would bear the brunt of his thundering temper. Nevertheless, it is said that he upheld the lesson Oyasama had taught him for the remainder of his life by never becoming upset for any selfish or self-serving reason. The implication here is that Shirobei would only express his anger when the greater good was at stake.

Daiichi sensei then shares an anecdote in which a dying Shirobei called over a woman who had served him for many years to thank her for her service and apologize for his willfulness before going on ask her for her continued loyalty, promising he would be reborn as a kinder and gentler person.

Yet when one seriously considers the remark Shirobei had overheard, one cannot help but feel that his anger was somewhat justified.

I feel the English “cannot get work there” doesn’t very well convey the derision of the original Japanese “kui-tsume sakan.” A more accurate rendition might be, “That freeloader plasterer from Osaka has to come all the way here to Yamato to put his skills to use.” Ueda Yoshinaru sensei mentions that anyone who would overhear such a remark would become upset.

I agree that Shirobei was rightfully incensed at such a heartless comment. He may not have been the richest plaster in Osaka, but he took pride in being a craftsman. He was not working on the walls of Oyasama’s Resting House because he could not find work at home; he was doing it out of a sense of appreciation and goodwill toward Oyasama. (An act that would be called as hinokishin or fusekomi today.)

Thus, it was a terrible shock to hear those ruthless words that he was a “freeloader plasterer.” It was such a shock that it is said he decided to leave in the dead of night. Yet Shirobei’s anger instantly subsided when he heard Oyasama cough when he exited the South Gatehouse and was about turn west toward Osaka.

Oyasama’s instruction to Shirobei the next morning implies that she expected more from him. As unwarranted the sly remark was, she tells him to keep focused on God and not pay attention to others.

Umetani Daiichi sensei writes that his ancestor responded excellently to Oyasama’s cough, for he cannot imagine where his family and Senba Daikyokai would be today if Shirobei had not noticed it. He also mentions hearing firsthand from the many people who were helped by this story when they found themselves at a standstill in life.

Regarding the instruction “Remember that God is the object,” Ueda Yoshinaru sensei writes: “This is a vital instruction that anyone ought to engrave in their mind at all times. If you insist on contending with other people, you will simply remain angry from morning to night. . . . Thus, it is vital to firmly fix in one’s mind that faith requires one to keep God as the object.”

Since I can have a volatile temper myself, I admit I often identity myself with Umetani Shirobei in Anecdotes no. 123. But that’s where any similarity ends. If push ever came to shove, would I have the spiritual capacity to hear that allegorical cough if it sounds? A tireless focus on the greater good is deemed essential, and I am unsure if I am capable of this at the moment.