124. A Drawstring Made of Wood Shavings (Japanese title: Kanna kuzu no himo)

In 1883, during the time of the construction of the Resting House, Hisa Kajimoto would take a sewing lesson every night from Oyasama.

One night, Hisa learned how to make a bag by sewing pieces of material one inch square together. But she could not find any cord to use as a drawstring. Just as she was wondering, “What shall I do?” Oyasama said:

“Dear Ohisa, will you go and get those wood shavings?”

When Hisa brought the wood shavings, Oyasama skillfully braided them into a cord which She then threaded through the opening of the bag.

Oyasama often carried a purse similar to this when She now and then visited the Kajimoto family of Ichinomoto. On each occasion, She would take some sweets in the purse so She could give them to the children of the family and also to the children of the neighborhood. The purses were of patches of various colors, such as red and yellow. And for their drawstrings, wood shavings were sometimes braided into a cord, and other times, paper-thin wood shavings were twisted into string.

My research / take
Sato Takanori has written that there are records mentioning when Empress Elisabeth of Austria took a tour of the Japan pavilion at the Weltausstellung 1873 Wien (Vienna World Exposition), she was greatly astonished at how thin the wood shavings made by a Japanese carpenter with a plane (kanna) were and actually took some of these wood shavings with her. Sato sensei then goes on to say that the wood shavings of an expert craftsman had the artistic power to fascinate people in Europe in the late 19th century (2006, p. 125). 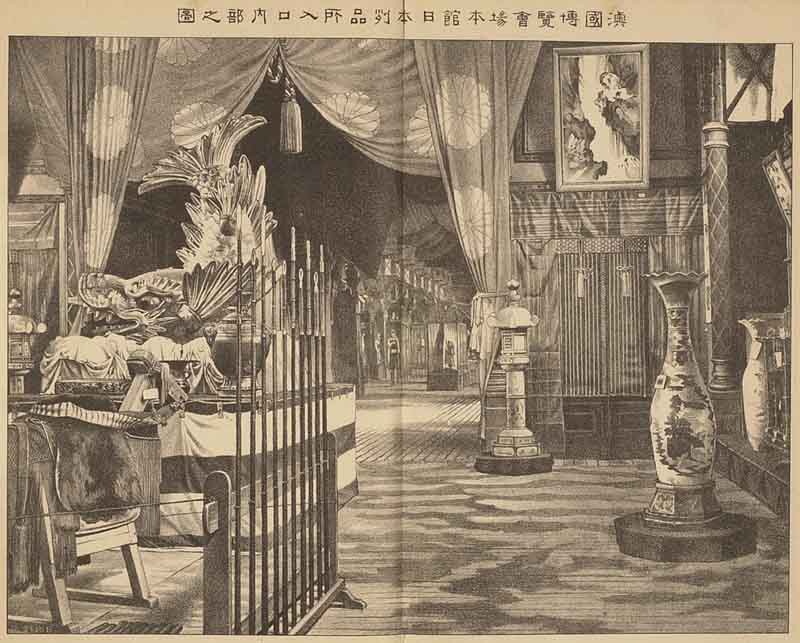 Sato sensei points out that because Oyasama is described putting resources such as tiny, unusable pieces of red and yellow cloth and wood shavings that were considered waste materials, it amounts to a call to all believers to take good care of things.

Theologian Ueda Yoshinaru sensei has mentioned that it seems improbable that Oyasama had woven paper-like strings from wood shavings but mentions such was the case.

The way he put this suggested to me he had actually seen some of these bags and purses that Oyasama allegedly made firsthand. This makes me curious whether or not these items may still be in existence. If they are, bring them out of their hiding places, for God sakes! We really would like to see them.

Lastly, a note on a phrase missing in the translation: “mittsu gumi.” This suggests that the wood shaving scraps where woven together in sets of threes when they were “braided into a cord.” As I have mentioned in several other posts on Tenrikyology.com, the number three symbolizes the divine providence of “skin and joining.”[1]

Then again, “mittsu gumi” may also happen to be the name of a particular weaving or braiding technique and may have not necessarily required items to be woven in threes.