In 1881, when Shina Okamoto was staying at the Residence, Oyasama said to her:

“Shina, let’s take a bath together, shall we?”

They took a bath together and Shina felt very honored and almost unworthy of it. It was, for her, an unforgettable and moving experience.

Several days later, Shina returned to the Residence. Oyasama said to her:

“Well! Welcome home! Quickly untie your sash and take off your kimono.”

Wondering what would happen, Shina, timid with respect, took the kimono off. Oyasama also disrobed Herself. Oyasama clothed her from behind with the red garment still warm from Her own body.

Shina felt extreme honor and delight which was absolutely inexpressible. When Shina took the kimono-undergarment off, folded it nicely, and put it before Oyasama, Oyasama said:

“Wear it when you go home. On your way home through Tambaichi town, wear it over your kimono and dance all the way.”

Shina was surprised by Her words. Her delight faded away, taken over by anxiety. She thought that by doing so she would only make a laughing stock of herself among the people in the town. She also feared that she would not be able to get home on that day because in those days worshipers at the Jiba were often taken to the police. However, she soon made up her mind and said to herself that she would not care whatever happened nor would she mind it even if she were not able to get home that day. She put on the red kimono-undergarment over her kimono and set out. On her way home through Tambaichi she danced the teodori with all her heart and soul.

Before she was aware of it, she was at the edge of town. At that time she realized that nothing bad had happened, thanks to divine protection. She felt relieved and her joy was doubled by the fact that she had been given the red garment by Oyasama and she had fulfilled her given mission. Deeply moved, Shina thanked Oyasama from the bottom of her heart and hugged the red garment tightly against her bosom.

“Tambaichi/Tanbaichi is currently a section (cho) of Tenri City. It presently is a quiet area away from a main road yet it was once a bustling area with stores and inns. It might be like walking down Kawaharajo [Hondori shopping arcade] today.

“The JR Tenri Station was once known as Tanbaichi Station.” 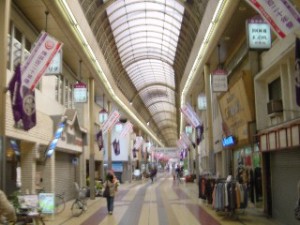 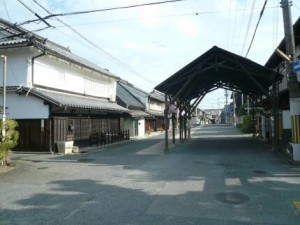 One element from Anecdotes 91 which I believe begs for some commentary is the description of Oyasama and Shina Okamoto taking a bath together. I imagine this is a cultural phenomenon that those who have never had much contact with Japan might not readily understand. So it must be noted that until the modern period, taking a bath was often a communal experience among Japanese. (For more info, please refer to this online article: “How to bathe in Japan.”)

Thus, the statement — “They took a bath together and Shina felt very honored and almost unworthy of it. It was, for her, an unforgettable and moving experience” — may only be fully appreciated within this cultural context. Shina possibly felt honored being able to share a bath with Oyasama because it signaled an intimacy between them that many followers would not have experienced.

With this memory still fresh in her mind, Shina is asked by Oyasama to disrobe her kimono when she visits the Residence again. Certainly an unthinkable prospect in this day and age — this is a scene that the modern reader might have serious misgivings about — but when one considers that Shina does not show any hesitancy on her part illuminates how much she trusts Oyasama.

It then might be noteworthy to add that Shina does not feel much hesitation in following Oyasama until she is told to “dance all the way home” wearing the kimono-undergarment she receives.

Although Anecdotes 91 mentions that it was more than possible for Shina to have been taken into police custody if she danced the Service Dance through the streets as Oyasama told her to, it might be worthwhile to elaborate on the historical situation a bit further to better appreciate the risk she was taking.

(I also would like to mention that this isn’t the first time Oyasama is described asking something impossible from Shina. Earlier, in Anecdotes 86, Oyasama encourages her to nurse a neighbor’s baby although she allegedly did not have any more milk to offer.)

I have already explained the elements of Oyasama’s teachings and activities that made her movement a target of local government surveillance when discussing Anecdotes 73. Yet, at the risk of repeating myself, I will note that her son Shuji attempted to circumvent the fact that the movement was essentially an illegal one by establishing an institutional tie with a temple belonging to the Shingon sect of Buddhism.

It is said that while Oyasama encouraged the faithful to “Form fellowships (ko 講)” as early as 1863, the first faith organization (named Shinmei-ko) dedicated to practicing what she taught was not formed until April 1878.2

In 1879 and 1880, villagers began to complain of various inconveniences they had to suffer because of the increasing number of worshipers “returning” to the Residence.

In 1880, Shuji petitioned the Jifukuji to establish a branch lay organization named Tenrin-O-Kosha, which was inaugurated by a Buddhist purifying fire on September 22. This legal circumvention allowed for the Service to be performed in its entirety with all the musical instruments a little over a week later on September 30 (as described in Anecdotes 74).

A membership list was later compiled, which listed the names of 1,442 members. Also in the same year, Shuji was held for one day at Tanbaichi Branch Police Station for an undisclosed reason.

In 1881, the year in which we are told Anecdotes 91 took place, Oyasama began urging the construction of the stone Kanrodai. Although Shuji passed away for rebirth on April 8 before the quarrying could start, it proceeds nonetheless (as described in Anecdotes 82).

While two sections of the Kanrodai were completed, the stonecutter, Shinjiro Yokota, later goes missing in the autumn. It is possible that the police interfered by threatening him. I recall also reading somewhere (don’t remember exactly where — sorry!) that he died after he was taken into custody.

Six police officers came to question Oyasama and her daughter-in-law Matsue in June that year, but left after finding nothing noteworthy to report. However, Matsue was summoned by police in September 17 regarding an error in the names of those staying at the Residence overnight. (This was related to the regulations surrounding the fact that Shuji had obtained a license for an inn to allow followers to assemble. With the license, there was a requirement to list the names of people who stayed overnight.)

On October 7, Matsue and four others were rounded up for the reason they were “gathering and misleading people.” They were “ordered to submit written accounts” and fined.3 Oyasama was also likewise arrested, made to submit a written account, and fined.

While the situation in 1881 was not as serious as that of the following year (during which the stone Kanrodai was confiscated by police and they “came all hours of the day and night to investigate… all the rooms of the house and to every corner of the premises, and they even examined desk drawers, chests, and cupboards”)4, the risk of Shina being detained by the police was nevertheless present.

The story is also similar to an account of how Yoshie Iburi was protected from being spotted by the police despite wearing red, a color that ought to make the wearer stand out all the more (See Anecdotes of the Honseki Izo Iburi 24).

The religious significance of Anecdotes 91, however, lies in the description of how a follower (in this case, Shina) resolved to follow exactly what Oyasama asks her, “that she would not care whatever happened nor would she mind it even if she were not able to get home that day.”

There is an implication here that God/Oyasama accepted the sincerity of her resolution and thus blessed her with the protection that allowed her to go home, dancing all the way, without being harmed or subject to embarrassment. Another implication being made here is that anyone who makes a similar resolution, stating, “I don’t mind what happens to me” with sufficient sincerity can also expect blessings not unlike the protection Shina received.

(On significance of Oyasama’s red clothes)