It happened that Oyasama’s hand would not bring Her chopsticks up to Her mouth, although She tried hard, if someone had secretly tasted the food She was served.

A vendor of sweet sake from Tambaichi usually came around at the time when people were waking up from their midday naps. One day, in 1881, the vendor was passing by the Residence. Tamae, then five years old, found the vendor and said to Iye Murata who was with her, “Let’s buy some for my grandma.” Iye then bought some and served it to Oyasama. Oyasama was very delighted with Her granddaughter’s affectionate thought, and took the cup of sweet sake into Her hands.

Astonishingly, however, when Oyasama lifted the cup to Her mouth, it continued upward, and She could not drink the sweet sake after all. Seeing this, Iye said to Tamae, “Dear, we should not have served it to Oyasama,” and humbly withdrew the cup.

This happened because on that day the vendor had been to various places and by the time he came around to the Residence the sweet sake had become like leftovers.

Anecdotes 89 here contains elements that remind me of earlier selections, namely Anecdotes 7 (Offering with a Sincere Heart) and Anecdotes 25 (Seventy-Five Days of Fasting).

To elaborate: I find the suggestion here that some unseen force prevented Oyasama from eating food that someone had secretly tasted and from drinking the sweet sake (amazake) her granddaughter suggested to get for her from a vendor (because it “had become like leftovers” by the time he reached the Residence) is somewhat similar to the descriptions in Anecdotes 25 of how she could not eat the delicacies the Matsuo family prepared for her since she was in the midst of enduring a fast. In Anecdotes 25, no matter how much Mrs. Matsuo and others attempted to feed Oyasama, it was to no avail. Then too, some unseen force had apparently prevented the food from entering her mouth.

That Oyasama was not able to eat or drink anything someone had been already partaken by also arguably serves as an implicit reminder of her sacred nature. (Further, that there is a description of amazake being offered to Oyasama in the first place implicitly suggests that if moderate alcohol intake is acceptable for God/Oyasama, it ought not to be an issue for most Tenrikyo members as well. Of course, as some readers may know firsthand, the alcohol intake some members indulge in at Tenrikyo events is anything but moderate! Yet that’s a subject that can be saved for another time.)

As far as elaborating on the elements from Anecdotes 89 that remind me of those from Anecdotes 7, both stories appear to be implicitly highlighting the importance of offering God/Oyasama the first serving of food and drink.

To put this in another way, I don’t find the content of Anecdotes 89 to be very significant in a historical sense. Rather, I’d like to suggest its importance lies in the (spi)ritual realm, especially for people who live in places where Oyasama happens to be enshrined (i.e. kyokai or other Tenrikyo places of worship.)

It is a fixed convention to make daily offerings of food and drink (usually sake and sometimes water) at Tenrikyo churches before the altars dedicated to God and Oyasama as well as the memorial altar(s) designated for late forebears of the faith and deceased church members. I imagine that Anecdotes 89 is implicitly teaching that it is an essential daily practice for people living at Tenrikyo places of worship to offer food and drink that has not been previously partaken by someone.

While there was once a time when the daily offerings to Oyasama at all churches had to be cooked food, this requirement is no longer in place. (However, Oyasama is served three meals each day at the Foundress’ Sanctuary at Tenrikyo Church Headquarters in accordance with the Divine Directions to treat her as if she were still physically present.)

Items that are usually offered on a daily basis at a typical Tenrikyo church include sake, rice grains, some fruit(s) or vegetable(s), “dried food” (kanbutsu), and small dried fish. The usual minimum daily offering at churches is five offering trays (sanbo) at each altar. The daily minimum at home altars is usually three. Daily offerings at Church Headquarters and church monthly services are more elaborate in number and presentation. 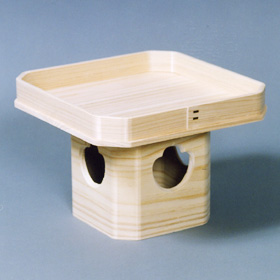 Although Oyasama’s granddaughter Tamae is not a prominent figure in Anecdotes, I thought this may be a good opportunity to offer some supplemental information on her.

It is claimed that Tamae’s birth is preordained in the Ofudesaki.

Previous historical events that are related to her birth begin from as far back as the first lunisolar month of 1869, when Part 1, verse 60 of the Ofudesaki is maintained to have been written. This particular verse mentions a child whose parent wishes to train “for two or three more years” but who is “no longer in the hands of God.” Tradition identifies the child alluded to in this verse as Oyasama’s daughter Oshu (or Shu), who was born between Shuji and a woman named Oyaso (or Yaso).

Shu was 18 when the above Ofudesaki verse was written. Although one would presume that although her parents were not legally married, she grew up at the Residence or somewhere nearby. I have heard that Oyasama truly loved her despite her illegitimate status (an affection she does not appear to have shared when it came to Shu’s half-brother Otojiro) but I have not yet found any written sources that help confirm this.

Although Shuji may have been in the midst of preparing Shu’s marriage with great anticipation (such is implied with the “training” mentioned in the aforementioned verse), the Ofudesaki goes on to say “Ponder well: however dear she may be to you, her parent, you can do nothing if she is out of the hands of God” (1:61). This verse is now thought to have anticipated Shu’s untimely passing (which occurred on 3/15/1870 of the lunisolar calendar).

Subsequent Ofudesaki verses encourage Shuji to “take a young wife” (1:65) and that even though others would likely consider the match God/Oyasama was proposing for him to be odd and therefore laugh, this marriage was “of prime importance” (1:71). While I found no source so far pinpointing the exact month and day it occurred, Shuji wed Matsue Kohigashi, who was just a year older than Shu, in 1869 not long after Ofudesaki Part 1 was written.

It is then maintained in the tradition that the Ofudesaki anticipates Shu’s rebirth as Tamae in the following verses (said to have been written in February 1875):

What are the thoughts of those within about the baby now conceived?

Never take this to be an ordinary matter. The intention of Tsukihi is profound.

It began on the fifteenth day of the third month, six years ago, when I received her.

Tsukihi has held her tightly in an embrace until now, and to show her quickly is My desire.

Unaware of this, those of you within are thinking of everything as being worldly common.

What do you think this talk is about? It is the prime matter in the beginning of this world.

Hereafter, I shall tell you everything about the conditions in the future path step by step.

Her name is Tamae. If you wish to see her quickly, thoroughly learn the hand movements which Tsukihi teaches.

The Life of Oyasama has a description of Tamae’s birth (on February 5, 1877) that reads as follows:

These verses, expressing the intention of God the Parent beforehand, show Oyasama’s eagerness for Tamae’s birth. So, when informed of this event, She went to the Kohigashi home in Byodoji Village, accompanied by Yuki Nishio and others, to celebrate the birth of the grandchild, Her heir.1

I can’t readily account for the discrepancy between the year when the Ofudesaki verses anticipating Shu’s rebirth as Tamae is said to be written (1875) and the actual year of her birth (1877). One could speculate that Matsue may have conceived circa February 1875 but miscarried because the timing for Tamae’s rebirth was not fully ripe until 1877.

Tamae would lose her father Shuji in April 1881 and her mother Matsue in November 1882. She was thereafter largely raised by her grandmother Oyasama.

Tamae later wed Shinnosuke, the first Shinbashira or spiritual and administrative leader of Tenrikyo, in 1890. She then became the first president of the Tenrikyo Women’s Association when it was founded in 1910. A convention commemorating the centennial of this association will be held tomorrow (April 19, 2010) in the Inner Courtyard of Tenrikyo Church Headquarters. It is expected to be quite a large turnout!