Shirobei Umetani returned to the Residence with his five or six-year-old son, Umejiro, in 1882 or 1883. When they were received by Oyasama, who was wearing Her red garments, Umejiro said, “Daruma-san, Daruma-san.” He must have recalled the red-clad daruma doll in the well-known advertisement for tobacco of that period. Shirobei was so embarrassed that he did not take Umejiro along the next time he returned to the Residence. Then Oyasama asked:

“What happened to Umejiro? The path will be cut off.”

After Shirobei received these words, Umejiro always returned happily to the Residence with his father and mother.

My take
This story has already been covered on Tenrikyology.com in other forms. Instead of going into detail about Anecdotes 117, I would rather refer readers to the links below. Still, I feel I do need to make some minimum commentary here.

Regarding the main idea, by telling Umetani Shirobei “The path will be cut off” if he didn’t resume bringing Umejiro with him, Oyasama teaches the importance of connecting the upcoming generation with the faith.

Children ordinarily do not go on religious pilgrimages. Parents may tend to want to leave their children at home when going on religious pilgrimages for a variety of reasons. First, the trip may be potentially dangerous. There is always a risk of a child getting potentially lost en route to the pilgrimage site. Second, there may not be accommodations suited or geared for children going to the pilgrimage site. Third, taking kids on a trip of any kind, as those with young children will unreservedly attest, can turn out to be quite an ordeal.

Shirobei, by taking his son Umejiro to Jiba, was horrified when Umejiro called Oyasama “Daruma.” When Shirobei didn’t bring Umejiro with him the next time, Oyasama warns, “The path will be cut off.” Although Shirobei left his son at home out of a fear that Umejiro would disrespect Oyasama again, her concern is instead focused on having the boy establishing a firm connection with Jiba.

It is also worthy to note that, a specific interval has been set aside for children to make a return to Jiba during their summer vacation since 1953. The interval has been set as July 26 to August 4 for as long as I can remember, but there was a time when the pilgrimage interval was said to have been even longer than 10 days. (I admit I was quite amazed at this most recent Children’s Pilgrimage. I was struck once again at the devotion of parents who brought their little wee ones across the Pacific from California and in some cases across a whole continent and over the biggest ocean from the East Coast just to participate.)

Lastly, I present some observations regarding a minor detail. Although one readily associates Daruma with the red round dolls of the same name that are believed to bring good fortune, the English translation fails to fully account for the description that a hime-daruma was drawn on the tobacco advertisement mentioned. Although knowing what the actual tobacco advertisements looked like would clear this minor detail up quite nicely, I can only imagine that the Daruma doll in question looked like something similar to the image below instead of the round figurines that have been anthropomorphized in Kako Satoshi’s “Little Daruma” children’s books. 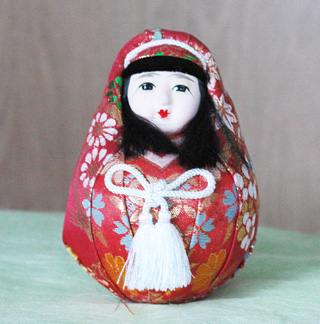 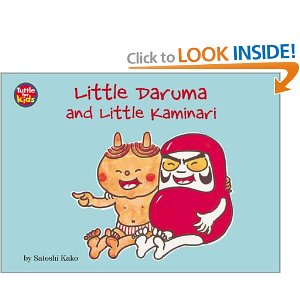