“The ninth of September is said to be the day of the Chestnut Festival. The Chestnut Festival is for sufferings to disappear. The bur of the chestnut is rough and prickly. Take away the bur and inside it there is a shell and then there is a bitter coating. Shell it, then peel the coating, and you will find a tasty nut. If a man listens to the truth and discards his bur and his bitter coating, his mind will become indescribably delicious.” 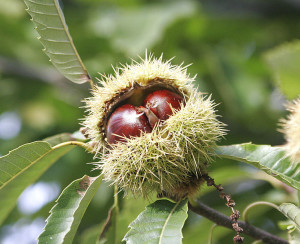 Photo from “Fir0002” via Wikipedia

It might be worthy to add that the 9/9 lunisolar date this Chestnut Festival (kuri no sekku) falls on would fall in October according the Gregorian calendar used today.

Nine (ku 九) in Japanese is a homonym of suffering (ku 苦) and is sometimes considered an unlucky number. However, Oyasama associated the number nine with the disappearance of sufferings on more than one occasion and the selection from Anecdotes noted above just happens to be one example.1

In Anecdotes 77, Oyasama uses a chestnut as a metaphor for a person’s mind (kokoro, also potentially translated as “heart” or “mind-heart”). Although the “core” of each person’s mind-heart is “indescribably delicious” like a chestnut, three layers must be shed — the “rough and prickly bur,” the “shell,” and the “bitter coating” —  before one gets to the tasty nut inside. There is the recommendation for a person to “listen to the truth” so to shed away these layers.

“Truth” (ri) here could refer to Oyasama’s teachings in general or those that are more specific, regarding “God’s providence” (i.e., the “ten aspects of God’s complete providence”).

A publication entitled Ikiru kotoba (Living words) offers the following insight in regards to Anecdotes 77, which seems to liken the abstract qualities of the mind with that of a mirror: “If we can remove the dusts that have solidified and become encrusted on our mind, we will be able to see its original shine.”2

The description of a mind being “delicious” also echoes portions of the Tenrikyo creation narrative (often referred as Moto no ri or “Truth of Origin” in English), particularly the portions describing God consuming the different “instruments” or creatures in the muddy ocean “to test/discern the flavor of their minds.” I imagine that a mindset that produces the best “flavor” would be selfless and be one closely aligned with God’s intention to bring about a harmonious and fulfilling existence for all.

(On the “chestnut festival”; I especially recommend the last two paragraphs of the section entitled “The Folk Customs of Okunchi”):