During the busy harvest seasons of spring and fall at the Residence, Oyasama used to come out and say:

There are two kinds of flails, large and small. The larger one has a handle and stick of almost the same length. It is so large and heavy that only a strong person can use it. However, Oyasama in Her advanced age used this kind and did the work of threshing as well as any young person.

It was a hot day in the early summer of 1879 or 1880. Takai, Miyamori and others were threshing, wet with sweat under the blazing sun, when Oyasama came out and joined them with a towel wrapped around Her head. When they saw Her working energetically, it was hard to believe that Oyasama was a woman over eighty years old. They all admired Oyasama for being as full of vitality as any young person.

I imagine the ideal religious response to Anecdotes 70 is a kind of awe of Oyasama’s vitality despite her advanced age, a vitality that adherents would feel is appropriate for the “Shrine of Tsukihi,” whom was also widely considered to be a “living goddess” even among non-believers.

I wonder, however, if it is more accurate to regard that Oyasama’s vitality came as a result of her hard work. Consider the following quote from The Life of Oyasama:

When the farming seasons came,[Oyasama] participated in all sorts of field work, transplanting rice seedlings, weeding the rice fields, harvesting rice, and sowing and harvesting barley. In later years, She said:

“In My childhood, I was not very healthy, but I came to do all sorts of farm work. The only exceptions were the plowing of rice fields and the digging of ditches. In all other work, I did twice as much as anyone else.”

Thus, She did all kinds of farm work, except those two heavy tasks, which were done only by men.1

It is said when she first married into the Nakayama family, Miki pushed herself so hard that the people around her expressed concern that she was damaging her health. To this, the young Miki is said to have replied, “I was born with a frail body so I believe it would be good for me to become tougher by working a little.”2

Miki was a hard worker. Today our homes are equipped with washing machines and rice cookers. Compared to the past, a housewife’s work has become much easier. When I think of how my mother lived when I was a child and compare it how things are today, the difference is like night and day. Today one is able to cook rice in one’s bedroom.

According to Oyasama’s later words, She came to do all kinds of work even though She was not very healthy. Generally, a person would say they are not able to work because their health is frail. This way of thinking is opposite of way things should be. One must work to be blessed with good health. As for the teachings, in The Songs of the Service, we read:

“There is nothing so trying as illness; So from now on, I, too, will devote myself to hinokishin.”

I went through the experience of doing dirt-carrying hinokishin even though I was in the middle of suffering from consumption. I believe I am now able to borrow a healthy body because I engaged in such work and hinokishin. Thus to say one cannot work because their body is frail is not at all an acceptable excuse. In fact, it is the opposite. This is clear from Oyasama’s words.3

Nevertheless, after I did a quick Google search of “karasao“4 (translated as “flail” in English rendering of Anecdotes 70) since I was curious about what it looked like, I must wonder if I have to reconsider my assessment after all. Seeing how long and wieldy this piece of Japanese farming equipment was, it really is difficult to imagine any 80-year old woman picking up such a thing and swinging it with any vigor. I certainly can’t see myself swinging a karasao considering the abysmal physical shape I’m in. Maybe awe is certainly the appropriate response after all. 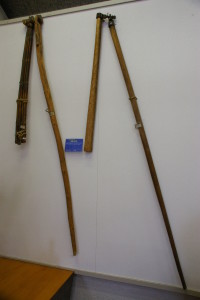 *Note: This post has been revised since its original publication.